Sound
In heavy genres, such as rock and metal, a lot of times, the guitars are responsible for the peculiar guitar sound, that comes from distortion. But the bass guitar is mostly played without distortion and sounds pretty clean, just like an acoustic guitar, only much deeper.

The bass guitar is also rarely found in standard households, compared to the guitar, which you can find in a lot of houses.

Transferability
If you know how to play guitar, chances are, that you might get along with the bass guitar, because the structure is similar and the fretboard is essentially the same, only one or two strings are missing. That is also one reason among a few others, the bass guitar has the reputation of being easier to learn, than electric guitar.

The other way around is a bit more difficult. If you only know how to play bass guitar, you probably have no idea about simple chords or how to play melodies.

Short Term Challenges
The bass guitar does not offer a lot of challenges in the beginning, compared to the guitar. If you get used to pressing down the string and then plucking it and at the same time hold some rhythm, you are practically ready to join a band.

Long term challenges
Unless you want to settle for merely playing 8ths notes and root notes of chords, you probably will have to deal with music theory and fretboard navigation, so that you can get more creative with playing great bass guitar lines with the help of scales and arpeggios or chord notes.

Sometimes, when you have friends that are musicians, you can observe them being asked, what instruments they play. Then they say for example “I play the guitar”. And others might say “I play the bass”. And this is where it can get funny. Either the next question is going to be “Is that the instrument with the thick strings?” or “What is the difference to the guitar?” – And to shine a light on this, I wrote this article for you!

Bass guitars in general are bigger than electric guitars and have thicker strings, but not as many. Most bass guitars have only 4 strings, opposed to guitars, that have 6 strings. But there are also a good number of bass guitars with 5 strings and very rarely you can even see bass guitars with 6,7 or even 8 strings.

The electric guitar is usually played with a pick, with which you hit the strings, so that they can ring out and make a sound.

A bass guitar can be played with a pick and without the pick, simply using your fingers to pluck the strings. You can see both options roughly equally as often.

Michael Korte is a professional musician and teaches Guitar Lessons with a broad background education revolving around music theory and orchestration applied to rock and metal music. 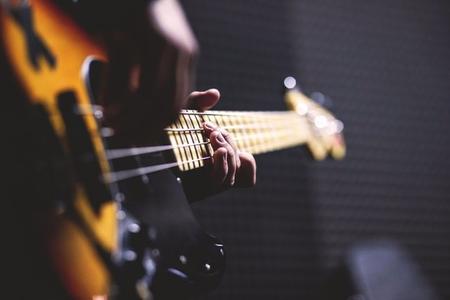